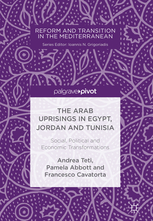 The Arab Uprisings in Egypt, Jordan and Tunisia: Social, Political and Economic Transformations

The Arab Uprisings were unexpected events of rare intensity in Middle Eastern history – mass, popular and largely non-violent revolts which threatened and in some cases toppled apparently stable autocracies. This volume provides in-depth analyses of how people perceived the socio-economic and political transformations in three case studies epitomising different post-Uprising trajectories – Tunisia, Jordan and Egypt – and drawing on survey data to explore ordinary citizens’ perceptions of politics, security, the economy, gender, corruption, and trust. The findings suggest the causes of protest in 2010-2011 were not just political marginalisation and regime repression, but also denial of socio-economic rights and regimes failure to provide social justice. Data also shows these issues remain unresolved, and that populations have little confidence governments will deliver, leaving post-Uprisings regimes neither strong nor stable, but fierce and brittle. This analysis has direct implications both for policy and for scholarship on transformations, democratization, authoritarian resilience and ‘hybrid regimes’.

Andrea Teti is Senior Lecturer at the University of Aberdeen, UK, and Co-Director of the Centre for Global Security and Governance. His current research focuses on the politics of democracy promotion, EU-Middle East relations, Egyptian politics, and political theory. He was Scientific Lead for the Arab Transformations project.

Pamela Abbott is Director of the Centre for Global Development and Professor in the School of Education  at the University of Aberdeen, UK. Her current research focuses on socio-economic development and political and social transformations in the Arab world. She was a senior investigator on the Arab Transformations Project. She was elected a Fellow of the Academy of Social Sciences in 2001.