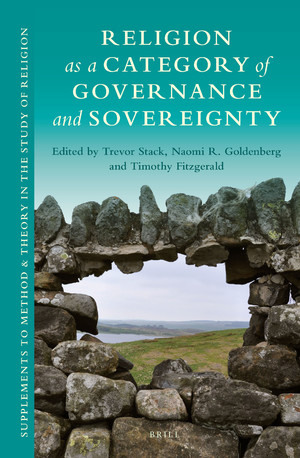 Religion as a Category of Governance and Sovereignty

Religious-secular distinctions have been crucial to the way in which modern governments have rationalised their governance and marked out their sovereignty – as crucial as the territorial boundaries that they have drawn around nations. The authors of this volume provide a multi-dimensional picture of how the category of religion has served the ends of modern government. They draw on perspectives from history, anthropology, moral philosophy, theology and religious studies, as well as empirical analysis of India, Japan, Mexico, the United States, Israel-Palestine, France and the United Kingdom.

The volume was the result of a British Academy co-sponsored by CISRUL in 2010, as well as a workshop hosted by CISRUL at Aberdeen in 2012. The lead editor Trevor Stack and author Brian Brock are CISRUL members. CISRUL is intending to follow up the volume with a special issue dedicated to developing the arguments of the book.